Occassional sightings of the Camberwell beauty occur in the region from time to time. Few are genuine migrants as most are believed to be the result of releases by breeders.

The Camberwell beauty is usually found in woodland habitats in mainland Europe, but it is also known to breed in a range of other habitats where the larval foodplants occur.

Sources
1. Smith, R. and Brown, D. (1979) The Lepidoptera of Warwickshire; a provisional list. Part One, Butterflies 1900-1977, Hesperiidae to Satyridae.
Notes
N1. This specimen was taken to Dr. Penny Wheatcroft of Coventry Museum for identification and seen by Roger Smith. Attempts were made to facilitate its hibernation, but the butterfly did not survive.

All sightings of the Camberwell beauty in Warwickshire should be viewed with a very high degree of caution. It is likely that any observations in the region are the result of accidental or unofficial releases unless they can be clearly linked with a migration event occurring along the east coast of the UK.

The first specimens of Camberwell beauty in England were caught in 1748, at Coldharbour Lane, Camberwell, London.

In 1912, paper merchants Samuel Jones adopted the Camberwell beauty butterfly as their logo to demonstrate the printing of several different colours on one piece of paper. An impressive wall mosaic of a Camberwell beauty originally adorned the Samuel Jones factory at Southampton Way. During the demolition of the factory in 1982, the mosaic was saved and can now be seen on the side of Lynn AC Boxing Club building (formerly a public library and baths) on Wells Way, Camberwell, London. 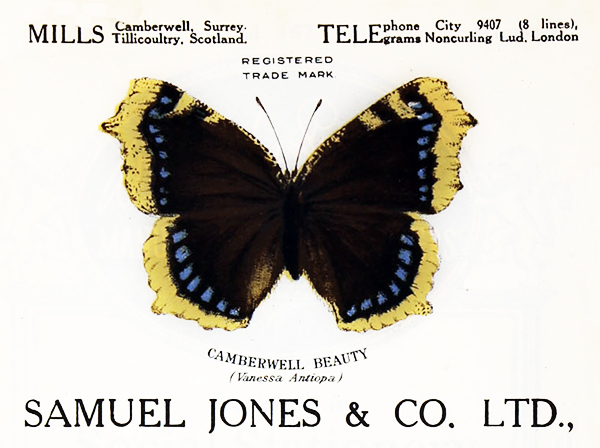